Painting by John Constable for sale from the private collection on behalf of a friend (Switzerland).

Subject: Seascape with a sailing ship. Salisbury Cathedral in the background. Signed on front.

Provenance: incomplete. The Galerie Hansen AG in Lucerne (Switzerland) has organized one or more exhibitions in cooperation with the Galerie Heinemann from Munich. There is at least one catalog with mentioned paintings by Constable, which are not shown, only described. Years later, the current owner bought the picture at an auction in Lucerne. 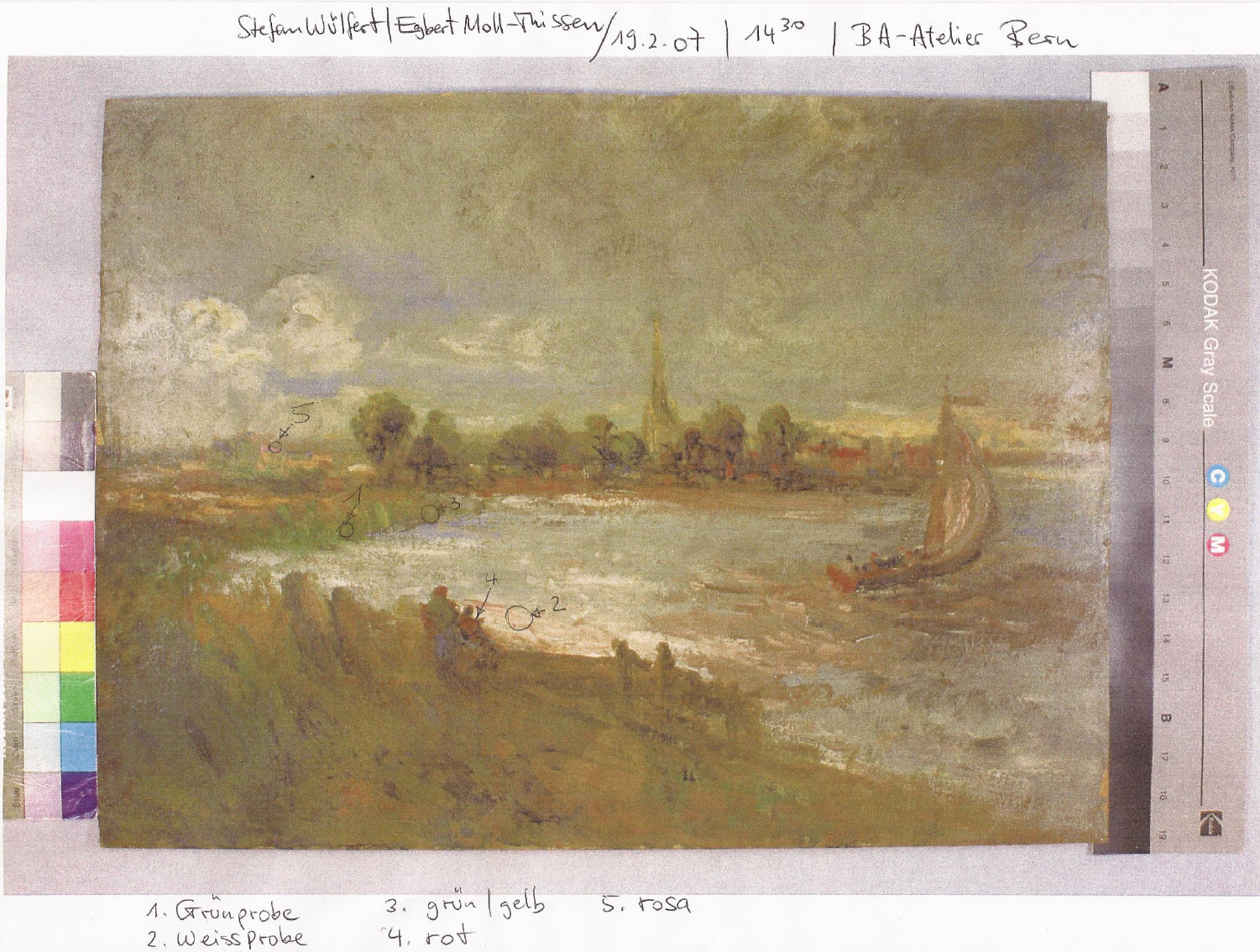 Investigation: In 2007 we commissioned an investigation in the art technology laboratory of the University of the Arts in Bern, Switzerland. The aim of the investigation was to clarify, on the basis of an inexpensive preliminary investigation, whether a contribution to the clarification of authenticity or the falsification of the painting signed “Constable” can be made with art-technological processes. For this purpose, the painting was examined visually in normal light and under UV lighting and, in addition, in sections also with a stereo microscope at approx. 40-fold magnification. In addition, an X-ray was taken and 5 microsamples were taken. These were characterized with respect to pigments and binders using polarization microscopy and FTIR microscopy.

Results: Apart from a small retouching and a flaw, no abnormalities were observed in UV light.

The X-ray image is inconspicuous and clearly shows the brushwork from the front and back. There is no evidence of revisions or invisible underpainting. The brushwork of the dark brown painting on the reverse is clearly visible.

Examination of the samples taken revealed a saponified oil as a binder.
Two samples were taken in the green (P1 and P2).
The pigments cadmium money and Berlin blue as well as kaolin, the latter probably as a filler, were proven here.
The second green sample (P2) also contained malachite.
The detection of cadmium yellow in the FTIR took place indirectly via a typical pigment by-product (cadmium sulfate).
The white (P3) removed contains white lead (basic lead carbonate).
The red-brown (P4) contains a mixture of hematite and plaster (the latter probably as a blend).
In the pink (P5), white lead, a red lacquer and a little ultramarine could be detected.

Berlin blue has been used since around 1704.
Cadmium yellow was available from 1829 until the last third of the 20th century.
The other proven substances have been used widely in painting technology since ancient times until today.

Upon request, we will be happy to send you the entire examination by email.

Conclusion: All colorants found were available to the artist mentioned in the signature.

Are you interested in this picture or do you have more information about it? I love hearing from you. Please contact me via email at christian@macek.ch